Diplodus vulgaris or Common two-banded sea bream is a species of seabream that has come from the Sparidae family. This species lives in rocky and sometimes sandy bottoms to depths of 160 m of the ocean surface.

Diplodus vulgaris or Common two-banded sea bream can reach a length of about 45 cm (18 inches) with the highest recorded weight of 1.3 kilograms (2.9 pounds).

The body of the Diplodus vulgaris or Common two-banded sea bream usually gray-silver, with two well-defined vertical black bands, near a gill and at the back of the body, just before the base of the wings. Another black stripe, less pronounced, appears to the eye. The body has golden lines, usually on the back.

The lips are rather thick. Each jaw contains 8 narrow, light-brown color incisors. In the western Mediterranean, it reproduces in October and November, and in the eastern Mediterranean in December and January.

Diplodus vulgaris is a gregarious species, often formed by groups of many such specimens. In the shallow case, it often forms small groups with other similar species.

Adults feed on benthic invertebrates, crustaceans, worms, and mollusks. It is considered an important food fish.

The lateral line of the Diplodus vulgaris or Common two-banded sea bream scales 51-61 from the base of the sea. Color: Usually gray, brown to green; Broad black band from the nape to the petrol letters and the upper end of the operculum; Broad black band throughout the longitudinal peduncle overlaps the anterior bases of the anus and dorsal fins;

Distribution: Common in all Mediterranean, Bulgaria Valley record in Black Sea; From the south of Brittany to the Atlantic Cape Verde Is., Madeira and Canaris. Elsewhere, Angola is closed.

Diplodus vulgaris species extends from 0 to 160 m in the Mediterranean, the Black Sea, and the eastern Atlantic Ocean, usually between 0 and 30 m.

Diplodus vulgaris lives in rocky, sandy bottles and seagrass beds. In sandy bottles, often the following species are found which dig the sand and try to steal their food. 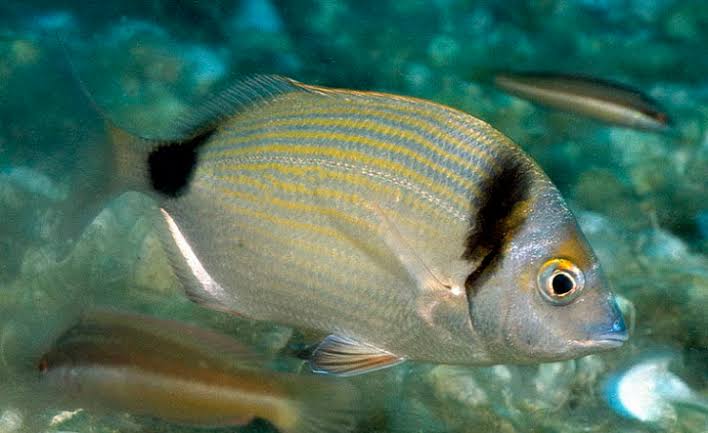 Diplodus vulgaris is often caught in various nets, fish traps, and light perpendicular. Locally, it is very important for artisan fishermen to catch and is often found fresh in local fish markets.

In sport fishing, Diplodus vulgaris is often caught onshore or rod and a boat on the original or handline and in rich rigs floating in shallow waters.

It is not very fond of its tops and will occupy small fish, different worms, small shrimp, oysters, various pastes, bread, cheese and other national hooks. Sometimes it is caught while trolling off the coast using live shrimp as a shoreline on the European seaside or general dentex.

Larger specimens are often captured with a speargun.

This is one of the best-tasting fish, especially the larger samples. A tasty meal that is baked with some olive oil, garlic, parsley and a few drops of lemon. In a mixed fish stew, especially when there are some fatty fish like els, it also has great taste and smell.

It can be used for fish soup or pan-fried, especially small samples.